Give yourself the gift of free time
Get the app

Glenn Harvey always wanted to be a hands-on parent, but a demanding corporate
career spanning almost two decades made it virtually impossible.

“With the stress of work and not being able to spend time with the kids, when the
opportunity came up it was a good time to make a change,” Glenn says.

After bumping into a friend who owned a V.I.P. Lawns & Gardens franchise and gave
glowing feedback, Glenn and his wife Leonie decided to investigate further and
ultimately giving it a go.

Since they were about to build a home, they also needed to make sure they would be
financially secure.

“It felt right,” says Leonie. “And V.I.P. were very supportive – we didn’t have to make a
decision right away.”

What sealed the deal was Glenn being able to work as much as he wanted without
penalty or hidden fees, thanks to V.I.P.'s set monthly fee structure.

Two years later, Glenn is fully booked out and enjoys having Leonie join him on jobs
once a week.

“It’s a privilege to be invited into someone’s home and be a part of their life,” Leonie
says.

“And we haven’t killed each other yet!” Glenn jokes.

For Glenn and Leonie, the best thing about being a V.I.P. franchisee is the freedom and
flexibility.

“Our work-life balance has completely switched,” Glenn says. “Before, work was first
and family was second. Now the kids are number one, which is huge.”

Leonie agrees: “Glenn is more relaxed. He has more time to spend with all of us and to
spend on himself, too.”

As well as getting to every netball game, Glenn enjoys cycling on weekends without
being on call 24/7.

“Now I can just enjoy the ride.”

If you want to run a successful Home Cleaning franchise business just like Glenn and Leonie, call 13 26 13 or fill in an enquiry form today.

Make that change! Contact us to learn more about having your own V.I.P. franchise.

Download the V.I.P App to book a cleaning or lawns and gardens service with your local franchisee. You select the job and we'll take care of the rest!

From the V.I.P. blog

Moving To The Country? Buy a Franchise! 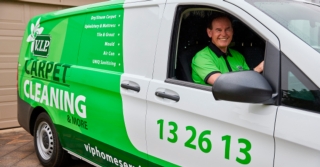 Is Your Carpet Cleaning Technician Qualified? It Matters! 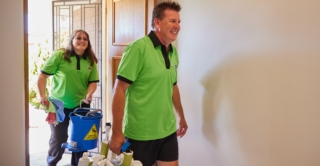 4 Irresistible Reasons to Buy a Franchise in 2022